When you mention Jackie Chan, Hong Kong’s Weinstein as our representative, we are not amused 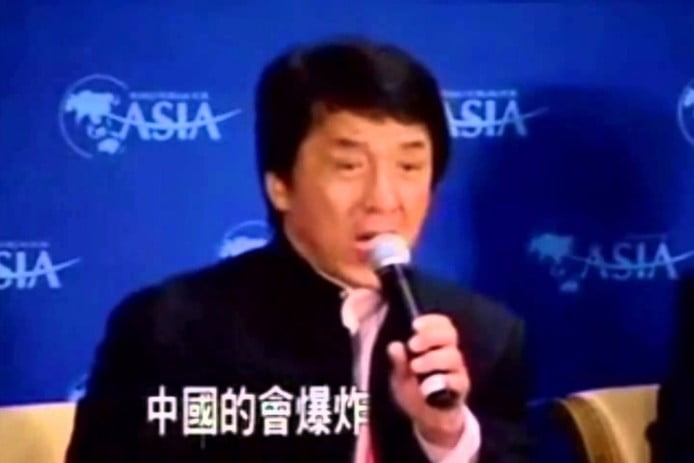 We are only amused by his remarkable ability to predict company’s future misfortune by endorsing them in ads.

When you identify yourself as a person from Hong Kong, there are always a few responses, claiming they know Jackie Chan, even with some energetic Kung-Fu style gestures in hand.

This is not just my experience, quite a number of friends expressed #metoo , while I announced on social media that I would write into this. They overwhelmingly expressed their contempt against the once an icon of Hong Kong. And they seem all agree, it is an embarrassment and even a nightmare scenario, when foreigners mention Jackie Chan to them these days.

A “mistake” 20 years ago “that any man would commit”

People in Hong Kong, or at least quite a number of them, has disliked Kung-Fu star Mr. Jackie Chan for 20 years, and a bizarre episode in Chan’s family surfaced few days ago may suggest you the reasons behind.

Meanwhile in Canada, Chan’s daughter out of wedlock, Etta Ng was reported appealed to the Internet, that she is running out of cash with her girlfriend.

Jackie Chan’s daughter claims she is homeless
Jackie Chan’s estranged lovechild claims she has been living under a bridge with her girlfriend Andi Autum. In a public…www.dailymail.co.uk

It was 1999, when Ng was born, the Kung-Fu star embroiled into a huge scandal. Although Hong Kong people was relatively “laissez-faire” on the personal life of celebrities, by merely treating them as gossip topics, Jackie Chan’s attitude, such as refusing to acknowledge the daughter, claiming his extra-marital affair “as a mistake that any man in the world would commit”, literally enraged quite many people. The media scrutiny even last almost half a year, and certainly reach a Weinstein-level by Hong Kong standards.

In recent tensions between Hong Kong and Peking, Chan stood firmly on Peking’s side, and grabbed any opportunities to appear on TV and showbiz in PRC, like on CCTV’s Lunar New Year Celebration programmes.

Besides, people in Hong Kong actually quite puzzled by his comments on things, as his self-contradictory may match the level of U. S. President Donald Trump.

Jackie Chan says Chinese people need to be ‘controlled’
The actor told a forum on the southern Chinese island of Hainan, whose attendees included Wen Jiabao, the Chinese prime…www.telegraph.co.uk

He once claimed “a Chinese television set might explode”, in a conference in China. Suppose a Chinese patriot shall endorse anything “made in China”. But it is very intriguing to Cantonese speaking people, that his endorsements in these years seemed backfired quite many times.

Among Hong Kong netizens, Jackie Chan actually is “revered” as one of the lantern gods, as various products and companies failed spectacularly after they received endorsements from Chan.

The most memorable one among such endorsements is a Chinese shampoo maker Bawang. After Chan’s advertisement was aired, the product allegedly contained poisons according to some local media reports, and in 2017 the divorce between its husband-and-wife founders plunged the company at the brink of collapse.

Chan also appeared on a region ad for Kaspersky Lab around 2010. His endorsement has quite long-lasting effect, as Best Buy pulled the Lab’s products in 2017. This claim sounds a bit remote though.

Jackie Chan also had high-profile endorsements given to some previously-unknown product from China, such as Fenhuang Cola and Sinian Dumplings.

Fenwang became a Chinese national brand around 2000 but suddenly the bubble busted. The brand is almost invisible unless in very remote areas in China.

Chan’s images were printed all over Sinian’s packaging. Unfortunately, in 2011 their products had to be recalled as bacteria contamination found.

Although these claims are never scientifically proven, Chan’s remarkable ability to predict company’s future misfortune in these cases, brought some amusements to Cantonese speaking netizens from time to time.

If you need to find an icon to impress your friend with your knowledge about Hong Kong, try Bruce Lee next time. That is the name my friends suggested they wish to hear with your “energetic Kung-Fu style gestures in hand”.